So just about everyone and their mother lists ‘sensitivity specs’, but try to find how they measure them… and what they mean by ‘sensitivity’.

There is no industry standard definition of receiver sensitivity, especially when it comes to analog video reception. Terms such as MOS (Minimum Operational Sensitivity), and MDS (Minimum Detectable Sensitivity), are thrown around in military circles, but exactly what they mean in our world is not clearly defined.

Just to illustrate this, here are three different definitions of sensitivity, which can vary from one extreme to the other by more than 10dB in a typical FPV A/V receiver.

Firstly, what is this ‘snow’? It goes by various names, ‘static’, ‘noise’, even ‘war of the ants’ when translated from certain languages.

As an FPV model moves further from the receiver, the free space path loss of radio waves in the atmosphere increases. This causes a decrease in the signal received by the A/V receiver. As the signal decreases to near the noise level, ‘snow’ starts to appear on the display. This is what we mean by definition 1. above.

As this signal decreases further, the receiver’s ability to discern color information degrades, at which point most display devices switch to a more noise-tolerant black and white image. This is what we mean by definition 2. above.

Finally, as the signal decreases further, the display device is unable to discern the synchronization pulses that start each video line (and frame), and the image becomes unusable. This is what we mean by definition 3. above.

To take a concrete example, take the new Uno2400 receiver, the standard version, and not the ‘unfiltered‘ edition for now.

This receiver has been measured to show first signs of snow at approx. -94dBm.
It looses synchronization at around -106dBm, a difference of 12dB, or a factor of 4 in range.

This means, that after seeing the first signs of snow in the image, and ignoring all other effects (multi-pathing, Fresnel zone, etc.), you can fly 4 times as far before the received signal becomes unusable.

So for this product, and for future products, ImmersionRC will start to specify sensitivity for analog video products in this way, two critical numbers which really explain how your video receiver will behave.

For the inquisitive… we will follow up this article with some details on how we test to these levels of sensitivity. 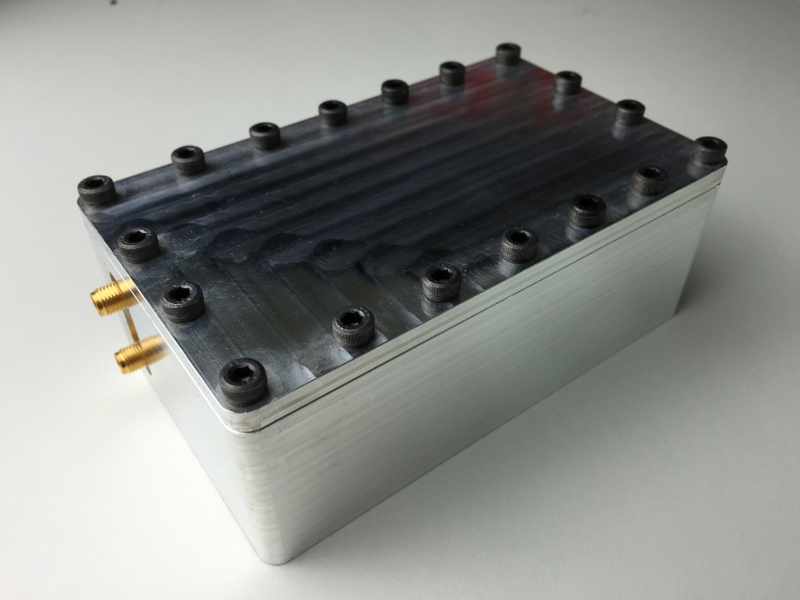 P.S. A preview of part of the system we used to measure receiver sensitivity. Something we call a ‘weak source’, a custom-made, very low power A/V source which is completely RF-tight through a system of mechanical interlocks, and RF-absorbing foam. This, plus the RF chamber in which the testing is done, is the only way to accurately test receivers down to the limits of sensitivity.